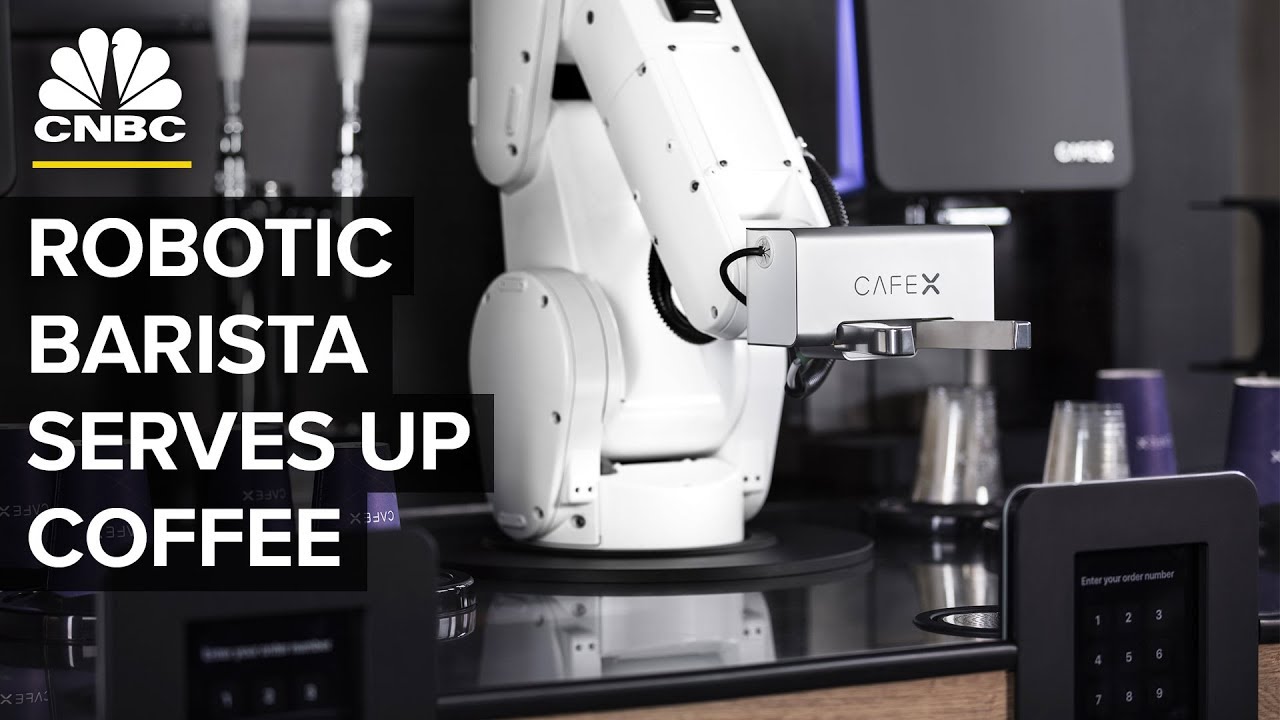 About CNBC: From ‘Wall Street’ to ‘Main Street’ to award winning original documentaries and Reality TV series, CNBC has you covered. Experience special sneak peeks of your favorite shows, exclusive video and more.

Cafe X, An Automated Barista, Could Be The Future Of Coffee Shops | CNBC

The robot revolution is here, at least for your morning caffeine fix. Cafe X Technologies is a new, $25,000 automated barista designed by the award-winning team behind Dr. Dre’s Beats headphones and speakers: the Ammunition Group. The Jetsons-style coffeemaker can sling 120 cups of joe per hour at specs that satisfy finicky roasters (and project partners) like Intelligentsia, Ritual and Equator.

The robo unit is essentially a fully operational café beneath a six-axis animatronic arm. Customers place orders on a kiosk touchscreen or via the Cafe X app and receive a text when the drink is ready, after around a minute of preparation. Like at a regular coffeehouse, you get a multitude of beverage options: latte, single-origin espresso, matcha latte, cortado and so on, and with different types of frothy milk, including organic Swedish oat milk. Even the robot gestures are crafted to evoke a true coffee bar experience. As it presents each cup to customers, the machine offers a sweeping “ta-da!” gesture.

“We knew a robot could create an exceptional cup of coffee, but we also wanted it to appear warm and friendly,” said inventor Henry Hu, 24, who conceived the idea in his second year at Babson College after being stuck in a coffee line for too long at an airport. “The baristas to me looked like factory workers,” he said. “They were moving cups around and pushing buttons, which made me think, ‘I bet we can build a product that automates these boring tasks way more efficiently.”

With a $100,000 Theil Fellowship, Hu and two friends built the bar protoype by hand from sheet metal in a San Mateo, California, garage. After securing $5 million in seed funding from investors like Khosla Ventures, Social Capital, Launch and Felicis Ventures, the project brought in Ammunition, the respected design firm that also worked on Square’s point-of-service register and Lyft’s dashboard “Glowstache.” Hu and his team’s concept then attracted additional investors, including the Thiel Foundation and Jason Calacanis, an early investor in Uber. To date the total funding stands at $7 million.

“We’re not trying to replace baristas or that relationship customers have with them,” said Victoria Slaker, Ammunition’s vice president of product design, who oversaw development. “But we saw an opportunity to make something more beautiful and more interesting than a standard vending machine that could also pour a mean cup of coffee.” From a design standpoint “the intention was to make the robot cool-looking but not goofy,” Slaker said, which is why the device does not have “googly eyes, a face or an ironic mustache, despite how tempting that was.”

Cafe X launched last year at AMC Metreon and 578 Market Street in San Francisco, and a second-generation model debuted this past February in the heart of San Francisco’s financial district at One Bush Plaza. A human refills coffee beans and milk and cleans the unit at least once a day, and a product specialist is available on site to educate customers and offer tastings. The bot typically fulfills between 300 and 400 orders a day. Prices are kept low, since there’s little overhead. A basic cup of Americano coffee is $3, and there’s no need to tip.

“The idea of humans making coffee for 10 hours a day is as crazy in 2018 as a tollbooth collector sitting in a metal box on a freeway,” said Jason Calacanis. “It’s also torture for the customer. Baristas get orders wrong, drink quality is wildly inconsistent, and coffee places don’t keep a record of every customer’s past drink order — but you can do all this with robotics.”

Starbucks cult followers disagree. They love the charm of the local barista cooking up their brews. Starbucks — the largest coffeehouse restaurant in the world, with more than 20,000 locations — has no official plan in the works to add robots, though the company does have a popular mobile app that lets you order Frappuccinos on the go, track purchase history and identify and save songs playing at your local Starbucks location.